Port Talbot runner Mollie Jones, 14, has been ranked top under-15 in the Welsh Championships in both the the 800m and the 1500m, assuring her chances of a future in athletics.

She represented Wales in the SIAB (Schools International Athletics Board) championships in March of the this year and ran for Wales in the London mini-marathon 11-17 category in April,  a prestigious event in which young athletes get to showcase their skills on a national level and which has previously been won by Mo Farah.

More recently, she ran outside her category on the 11th of June, entering the Welsh senior championships in the ‘under 17’ category and running against older and more experienced girls.

Mollie said: “I was a little nervous but I entered because I wanted to run against the older girls for the experience”.

Against expectations Mollie managed to win the heats and come bronze in the 800m.

“I was very pleased with the times and the bronze but it’s made me even more determined to progress,” said Mollie, who felt that winning in the heats means that she should be aiming for a gold next time.

Mollie has been running with her mum Colleen O’Leary, a former international runner herself, since she was about 8 years old just for fun but started taking it more seriously at about 10-11 years old.

She has been competing and beating personal bests on the British Athletics “power of ten” scheme since 2012. The scheme aims to bring together stats and times for young athletes all over the UK in order to encourage competition and support them to become better at their events.

Mum Colleen runs the ‘Up and Running’ training sessions on the beach at Aberavon, meeting by the Blue Whale on Wednesday (4.30-5.30pm) for the kids group, Thursday (6.30-7.30pm) for the women’s group and (7.30-8.30pm) for the mixed group every week to encourage people to get into the sport.

“I am a firm believer in introducing children to sport through athletics, teaching the fundamental movements of Run, Throw and Jump – which are transferable skills set for all sports,” she said.

Colleen’s latest project is trying to find a ‘quiet space’ in order to set up a running group especially catered to children with special needs. 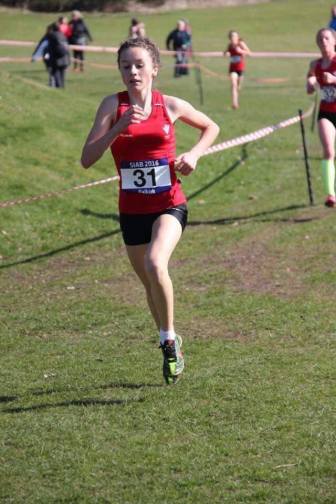 Mollie running at the SIAB in March 2016

Mollie has graduated past training with her mum now and regularly trains with the Swansea Harriers, currently on her second season  with her coach Kevin Tobin.

She trains four times a week, twice with the team and twice by motivating herself to run and keep up with her trainer.

Where some teenagers might struggle to juggle training with school work and a teenager’s social life, Mollie said: “I know I can’t do sleepovers or late night because sleep deprivation really affects my running but I just work around it all because at the end of the day it’s my future career.”

Her mum agreed: “We have never had to push her too hard as she has a natural talent, and Mollie works really hard at everything she does”

Mollie is a pupil at Sandfields, where despite her diagnosis of dyslexia she is in all the top sets. This year she will be moving to the new Ysgol Bae Baglan school, who are currently looking for local businesses to sponsor their athletics team so that they can further support not only Mollie but other children in the area.

She is also looking forward to taking part in an ‘invition only’ race in Oxford, known as the ‘British Miler Race’ which is on the historical track where Roger Bannister broke the record in 1954 by running a mile in under 4 minutes, and will spend the summer training for the Welsh Under 15’s competition in August.